Villa Nelimarkka, a villa built by Eero Nelimarkka for his family, is located in Alajärvi, about 500 meters from the Nelimarkka Museum. The basic part of the two-storey villa with a mansard roof was completed in 1932. The property was opened to the public in 2013 and was named Villa Nelimarkka. Villa Nelimarkka hosts events and exhibitions and serves as the artist house of the Nelimarkka residency. The villa is protected by the Building Protection Act, and there is also a smoke sauna in the yard. The villa can also be rented for private use. Respecting the old, the furniture and décor of the restored building have been restored to their original appearance.Villa Nelimarkka is located at Pekkolantie 67, Alajärvi. 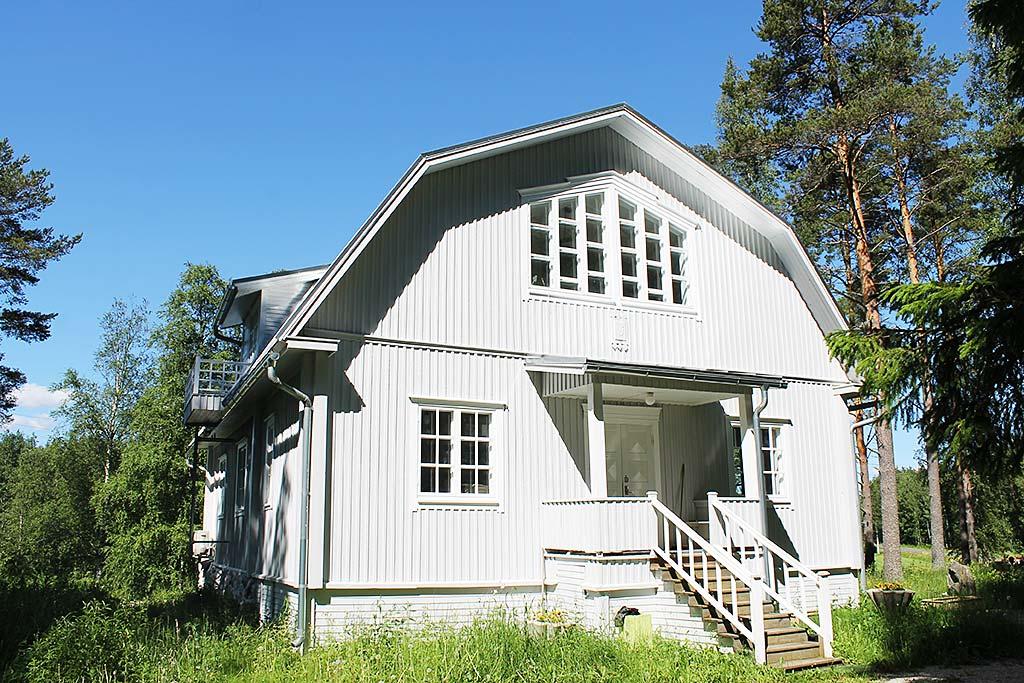 The History of Villa Nelimarkka

Painter Eero Nelimarkka had lived permanently in Helsinki for twenty years, when he wanted to return to his home town of Vaasa. However, Nelimarkka was no longer satisfied with Vaasa, and he wanted to find a place elsewhere “where you can delve into yourself and your work in all its serenity”. Such a place was found in Nelimarkka’s father’s home town of Alajärvi in Pekkola, where he began to build his villa. All the drawings of the building were made by Nelimarkka himself. When the villa was completed in 1933, Nelimarkka spent a lot of time in Alajärvi painting landscapes and genre pictures.

In the words of Nelimarkka after the wars, “[…] a miracle had happened because people were battling to buy art!” Landscape images from Southern Ostrobothnia in particular sold well. Nelimarkka could now afford to make months-long trips together with his wife Saima, and visits to Alajärvi decreased. He rented the villa for the years 1947–1952 because he had decided to also travel during the summer, both in Lapland and abroad, “to enrich his subject matter”.

After the death his wife Saima in 1953, Nelimarkka even planned to sell the villa as a village school in Pekkola, but began again to enjoy himself in Alajärvi. The children and their families also considered the Nelimarkka’s villa a pleasant summer resort. While spending time at the villa, a long-standing dream of founding an art school came to the surface.

Nelimarkka asked the Department of Education for a recommendation for a study trip to the United States and said, “For decades, I have had in mind the idea of founding a school to teach painting.” The half-year study trip strengthened Nelimarkka’s idea of an art school. The intention was to house both the collection of the Nelimarkka Foundation and the art school in the villa. However, the building turned out to be too small and Nelimarkka bought his father’s farm from his relatives, placed the collection in the farm’s residential building and started to run courses there. A new museum building next to the residential building, the Nelimarkka Museum, was opened in 1964. After the Nelimarkka Museum was completed, the artist stayed in the adjacent residential building and the villa remained a summer resort for the children.

After the death of Nelimarkka, the villa was rented for several years and after that it was empty for a long time, until it first became the property of Osakeyhtiö Pekkola Oy and later the city of Alajärvi. The Nelimarkka villa was renovated with small funds by the Eero Nelimarkka villa association founded in 1993. The city of Alajärvi completed the renovation and in the summer of 2013 the villa was inaugurated under the name Villa Nelimarkka. The villa hosts village parties, exhibitions, concerts and a variety of events. The residency activities expanded to the villa in 2014 and moved there entirely from the Nelimarkka Academy premises in 2015.